Visit to a village 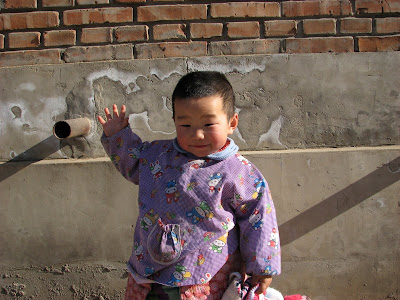 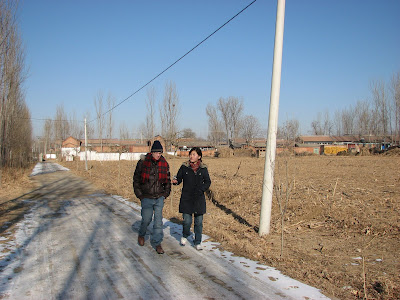 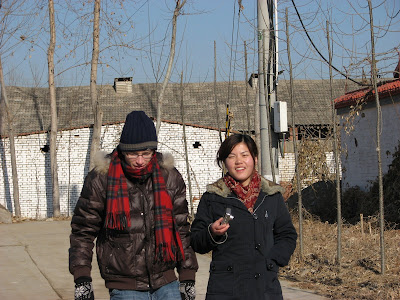 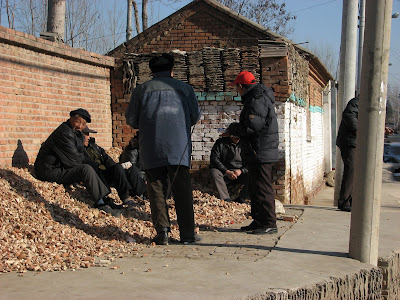 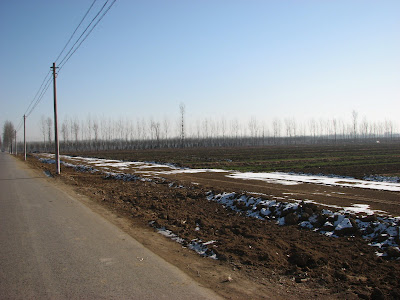 Last weekend I visited the family of one of my new Chinese friends, a girl who studies English at the Beijing language University. This girl comes from a tiny little village outside Beijing, in Shunyi district. The village is actually very close to Beijing in geographical terms, but of course it feels a million miles removed from China's capital. All I had to do to get there was take a bus for an hour to a town called Yangzhen, where I was met by the girl herself, and then another local bus for about ten minutes. In the bus, which was unbelievably crowded, I attracted the curiosity of the driver, who asked my friend where I was from, what I was doing in his hometown, and why he had never seen me around there before (!)
When I got off at the tiny hamlet the girl comes from, which is called 荣各庄 (Rong Ge Zhuang) the first thing which struck me was the fair amount of snow on the ground. The countryside around Beijing gets considerably colder then the city itself, where there had only been a very slight snowfall a few days earlier, but there was no snow to be seen on the ground. The village itself must only have contained a few hundred people, a thousand at best. Foreigners are obviously unheard of in such places, so I attracted a fair amount of stares. The girl's family was very nice, although of course proper communication could only occur through her translation, since my Chinese is still pretty dreadful. Her parents are basically farmers, and there was a large number of small pigs living in sheds in their front yard. Her sister works in a shop in the nearby town. The house itself was quite large, but the conditions inside were very simple. There was no private bathroom, but just a comunal bathroom in the field outside shared by quite a few families, which consisted of nothing more than a hole in the ground. There were no taps with running water inside the house, but there was an outside tap which apparently works for 12 hours a day, and the family always keeps water stored in the kitchen. What struck me most was how freezing the house was inside. Although there were some radiators, the heating was completely inadequate, and I kept my coat on pretty much the whole time I was there. The only really warm place in the house were a couple of beds of the kind which are often used in the countryside in northern China, which are made of bricks and have hot water running through them to keep them warm. I slept on one, while the whole of the girl's family slept together on the other one in a different room, even though there would have been single beds available for my friend and her sister, both in their twenties, but I suppose that it was too cold to sleep on any of the other beds. Luckily I never needed to get up to go the bathroom in the middle of the night, since putting my coat on and going outside in the freezing cold wouldn't have been too pleasant. The house had an internet connection for my friend and her sister to use, although it was rather unreliable.
The supper was very tasty, and it consisted of meat and vegetables which had to be cooked on the spot in a large pot of boiling water in the middle of the table, in the Chinese style. The parents seemed quite happy to have a foreign guest, certainly the first one they'd ever had. After supper, I was introduced to a neighbour, a young woman who works in Beijing but comes back in the weekends, who spoke a little bit of an English and wanted to practice.

The next morning I went for a walk around the village and took some photos, which you can see here. I was told that the villages in the municipality of Beijing, such as this one, tend to be better off then villages in other provinces, because they benefit from the capital's proximity. For instance, this village had cement roads, which you would not find in rural areas in many other parts of China. The extremely flat landscape and the snow reminded me a bit of Russia.
Posted by Ji Xiang at 3:36 AM 3 comments: