It seems that a few people high up in the Chinese hierarchy are finally starting to realise that, when a country operates on a parallel system to the rest of the world and does nothing to accommodate foreign visitors, there are costs.

In a post last year, I talked about the large gap between the number of foreign tourists that visit China and the number of Chinese that holiday abroad, and how this is hurting the country's capital account balance. The figures for 2017, which I provided in my post, were 130 million trips abroad made by Chinese citizens, as opposed to only 30 million trips to China made by foreigners. It appears that in 2018 the gap got even wider, with 30 million trips to China against 150 million trips abroad by the Chinese. These figures for inbound tourism are seriously unimpressive, with even far smaller countries like Thailand or Turkey managing to attract more visitors over the course of a year.

According to a report by Sixth Tone, based on previous reports in the Chinese-language press, it seems that a real effort is now being made to address this deficit. In August the Chinese government published a set of proposals to encourage inbound tourism (although they don't appear to address any of the real issues, talking only about "developing new tourist routes, performances and local products to attract visitors"). Then last week Shanghai brought a bunch of foreign exports on tourism together at the China International Import Expo, and announced a number of projects designed to attract foreign visitors.

Most importantly, earlier this month Ant Financial and Tencent announced in quick succession that it has now become possible to link foreign credit cards to Alipay and WeChat. Alipay is rolling out a system geared specifically to foreign travellers, who will be able to use it for a 90-day period. In principle this would go some way towards solving one of the biggest difficulties that short-term visitors face in China, in other words the impossibility to pay via mobile phone, in a country where using cash is now probably rarer than it was at the peak of Maoism.

If this could finally happen, it is only because the People's Bank of China took the step of allowing the two companies to open up to foreign bank accounts, abandoning concerns about money laundering and cross-border cash flows. Leaving aside the fact that Alipay's new feature for foreign users doesn't seem to be working all that well, this suggests that an effort is being made all the way at the top to start making China a bit more convenient for foreigners to navigate.

Some of the reasons for this shift aren't hard to see: James Liang, the co-founder and chairman of Ctrip, who has long been calling on the government to make China more open to foreign visitors, claimed at a conference in May that the deficit between inbound and outbound tourism is costing China a figure equal to 1.7% of its huge GDP. At a time when economic growth is at the lowest point in decades, and the trade war with the US is causing much damage, this state of affairs is obviously becoming a problem. Since restricting foreign travel for ordinary Chinese remains politically impractical, there is no alternative but to try and make the country a little bit more inviting for outsiders.

At the end of October the Ctrip chairman, who seems to have made this his mission, gave a talk at the "World Culture and Tourism Conference 2019" in Xi'an which was summarized in a popular WeChat post, entitled 携程梁建章：为什么外国游客不愿意来中国? (Ctrip's James Liang: why won't foreign tourists come to China?). The post has gained over 100,000 views, showing that this topic is finally gaining some traction. Mr. Liang claimed in the talk that while outbound tourism has been growing fast over the past decade, foreign tourism to China hasn't really grown at all. He pointed out that foreign tourism makes up 1-3% of GDP in most of the world's biggest economies, while in China's case it only accounts for 0.3%. In his estimate, China's tourist sector still has the potential to rake in an extra 1-200 billion dollars annually.

Mr. Liang then outlined the three main reasons why, in his view, foreign travellers are not coming to China. The three points he made are the difficulty of getting a Chinese visa, the inconvenience of not being able to access mobile payments, and the "cost of internet controls". The last point is eye-catching, because it is rarely made in public in China: the Ctrip chairman pointed out that the blocking of foreign websites (which he euphemistically referred to as "foreigners not being able to access their own country's internet after reaching China") makes it hard for Chinese travel destinations and businesses to promote themselves abroad, while also making it hard for foreign travellers to share their experience of China on social media.

As the WeChat post's author adds: "foreign travellers make an effort to get here, and then you don't even let them post in their "Moments". That's not beneficial for the reputation of China's travel industry" ("Moments" is where you post photos in WeChat). The article then suggests lifting the restrictions on the internet for foreign travellers, which seems unlikely to happen any time soon. 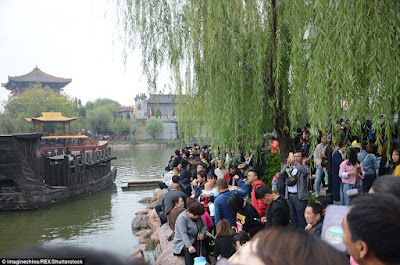 In any case, it may well be that a shift in thinking is indeed happening, and that the leadership is waking up to the fact that the lack of foreign visitors is an economic issue. It is even possible that more measures are on the way. But whether these efforts to attract more tourists will lead to anything is an open question.

Making mobile payments easier is certainly an important step, but I suspect the biggest issue remains the difficulty and trouble in obtaining tourist visas, especially considering that citizens of developed countries no longer need visas at all to enter most of China's neighbours. If the government really wants to attract more foreign tourists, this would be a good place to start. Then there is the mind-boggling fact that a large proportion, even a majority, of hotels around China don't accept guests with foreign passports. This is seriously inconvenient for the independent traveller, not to mention unnecessary and unfair. Changing this state of affairs should not be all that difficult.

The larger point is that, beyond a certain degree, isolationism has real economic costs. Over the last decade the general trend has been for China to become more closed and harder to navigate for foreigners, whether long-term residents or visitors, in step with the tightening of restrictions and ideological controls and the creation of a local internet that runs separately from the rest of the world. Meanwhile, the great firewall has became higher and harder to get around than ever before. Apart from tourism, there are certainly many other ways in which this is constricting economic growth and dynamism. It will be interesting to see if the pressure brought on by the trade war and the economic downturn may actually exert a push in the other direction, towards greater openness and global integration.
Posted by Ji Xiang at 3:08 AM 2 comments: