In the last two days there have been some heavy snowfalls in Beijing, the first real snow to grace China's capital this year. My Vietnamese roommate finds this quite exciting, since he has never seen snow before.
In Beijing it usually snows more often in the winter, but this winter has been particularly dry, and the peasants have been suffering because of draught in large areas of Northern China. I have read that the recent snow in Beijing was at least partly artificially induced by the authorities through iodide sticks which were fired into the sky, so as to ease the draught. The Chinese authorities sometimes resort to such methods to prevent or encourage rain and snow, even though their effectiveness has not been conclusively demonstrated

Anyway, here are some photos of Beijing unders the snow. 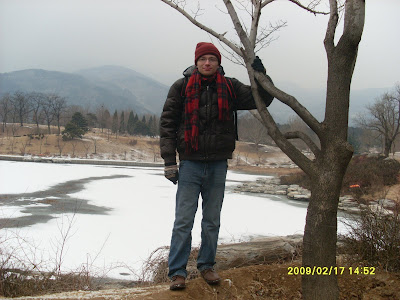 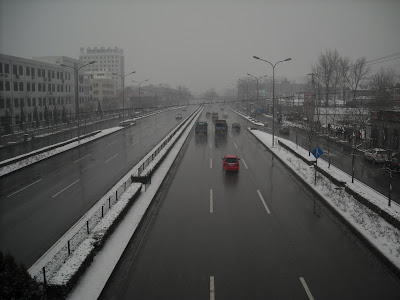 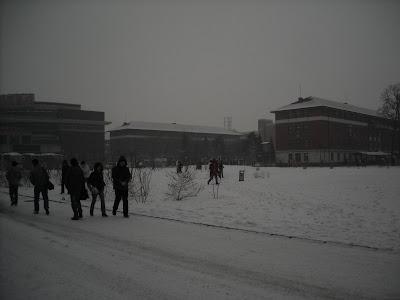 The title of this post is a pun which has become extremely popular in China over the last Spring festival (the holidays for the Chinese new year). The chinese character 牛 is pronounced "niu", like the English word "new", and it means "ox", and the year which has just started is indeed the year of the ox. Thus happy 牛 year!
New year's eve was on the 25th of january this year. I spent it in a tiny little village in Guangxi province, in the South-West of China, near Vietnam. I have a friend in my university who comes from there originally, and she invited me to spend the new year at her family's home.
The experience was very interesting. The village was extremely small and remote. The only shop in the village belonged to the parents of this girl, and it was placed in the entrance to their house. All it had on sale was a few basic items. The people of the area are not Han but Zhuang, the biggest ethnic group in Guangxi, and they speak a language which is completely unrelated to Chinese, although almost all of them are also able to speak fluent Mandarin Chinese. 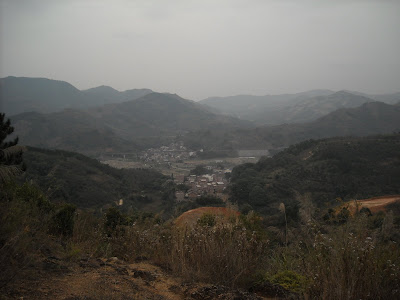 The local people were very friendly and gave the impression of being happy and relaxed most of the time. The weather was relatively warm during the day even though it was the middle of the winter, since I was deep in the south of China.
On new year's eve I experienced some of the local traditions related to the new year. All the houses in Chinese villages usually have red scrools pasted around the door, with phrases wishing fortune and prosperity written on them. On new year's eve, the old scrolls are scraped off and new ones are stuck up, at least in the village where I was staying. I encountered my Chinese name "Jixiang" on quite a few of these scrolls, since it is a traditional expression meaning "auspicious". The Chinese seem to attach an awful lot of importance to symbols of good omen and good luck, and traditions pertaining to this. It is also common to find a drawing of a fish on the scrolls, since the word for fish is pronounced the same as the word for wealth. A Chinese character which one sees almost everywhere during the new year period is 福, pronounced "fu", which means good luck. You can often see it on posters stuck onto doors, sometimes written upside down, as this is also meant to bring good luck. 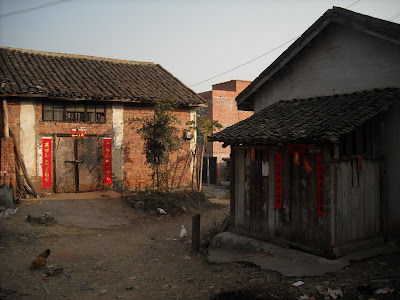 Next to the village there was a little temple for the ancestors, where the local people brought offerings to the deceased on new year's eve. One of the most common offerings was a chicken. People also offered bills of fake money with huge numbers written on them, which were then burnt. Some of the houses in the village also had an altar for the ancestors inside.

In the evening everyone in the village set fire works off again and again, creating a huge racket. The children seemed to be having an especially good time. Of course, the family I was staying with had a huge meal in the afternoon to mark the New Year. 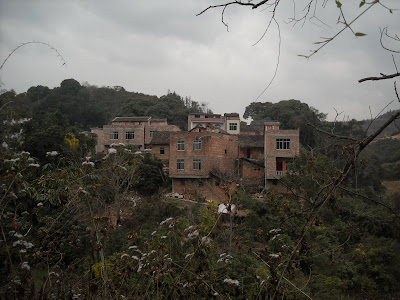 (The village where I stayed) 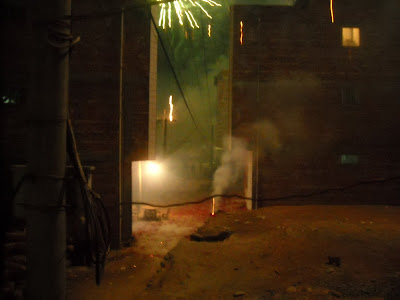 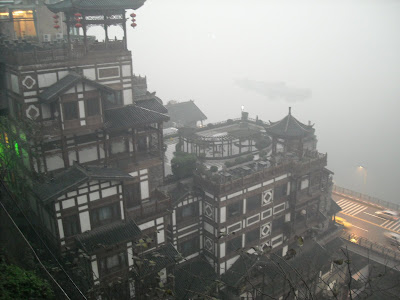 During my New Year holidays I took the chance to return to the place where I taught English for a few months four years ago. The little town where I taught is called Qijiang, and it is an hour's drive away from the big city of Chongqing, which is well known throughout China. 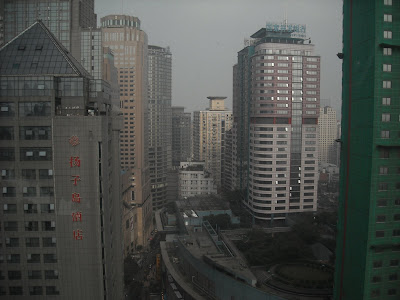 
Coming back to Chongqing after four years, I had a chance to witness the pace of China's development first hand. I had the feeling that the city has changed a lot since the last time I was there, even though four years is not such a long period of time. There are noticeably a lot of new high-rises and less old, run-down buildings. Although the city still has some shabby areas, everything somehow looks newer and smarter, especially in the center. It is hard to know how much of it is just down to my perception, but I saw some things which were definitely not there four years ago: there is an ultra-modern monorail which crosses the center of the city, and I also visited a new multi-storey building on the Yangtze river (shown in the photo) built in a traditional style, full of fancy shops and restaurants. Of course, for many ordinary people life has not changed a great deal: the local Esperantist who found me the teaching job four years ago still lives in a cramped flat in an old and run down apartment block on the city's outskirts.

I had the same feeling when I visited Qijiang, the town where I actually taught English: even though it is hard to put my finger on why, I had the definite feeling that the place had changed and developed considerably in just four years. There was a brand new modern supermarket, which didn't exist when I lived there, and the road outside the school where I taught now has cement on it, while four years ago it didn't. When I went out in the evening, I came across a huge new night club which didn't exist the last time I was there. Of course, living conditions are still quite simple for many of the people, as I witnessed when I visited the home of a retired school teacher who used to know Esperanto many decades ago, although he appeared to have forgotten it completely.

I have read that Chongqing has been showered with money by the central government in the last years, and it has developed faster than most other places, becoming the richest city in Western China. The pace of development is probably not as fast in other regions. Also, it must be remembered that life in the villages and the rural areas remains extremely simple.

The one thing development has not brought these places is a big influx of foreigners. Even in such a big city as Chongqing, foreigners remain quite rare, although I did see a few in the center.

Taking a train in China over the new year. 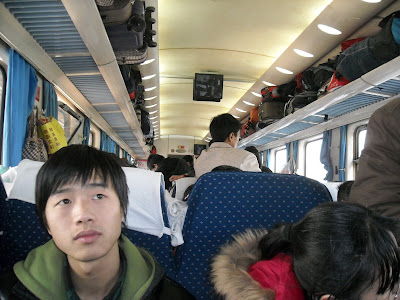 I have just got back from three weeks of travelling for the holidays for the Chinese new year. The new year is the most important holiday in the Chinese calendar, a bit like christmas in the west. This year new year's eve fell on the 25th of january. My university gives its students around a month's holiday for the new year.

During this period, every single Chinese person who can goes back home to celebrate with their family. It is the one moment in the year when every Chinese family expects to be together. All the migrant workers in the big cities like Beijing also go back to their homes in the countryside, often travelling for days. The transport system, and especially the train system, is put under huge strain during this period, as dozens of millions of people return home.

I had the brilliant idea to start my travels by taking the train from Beijing to Chengdu on the 13th of january, just as the holiday season was getting started. Chengdu is the capital of Sichuan, the province which was hit by the earthquake last year, and it's almost on the other side of China from Beijing. Me and the Chinese girl I was travelling with only started looking for a ticket seriously a few days ahead, even though it is advisable to buy your ticket weeks ahead if you want to travel during this season. It turned out to be impossible to find a ticket for a bed. All we could get was two tickets for hard seats on a train which would stop at every station and take 31 hours to get to Chengdu.

Most of the Chinese people who I told about this were horrified. Everyone warned me that travelling with just hard seats over the new year period is horrible, that the trains are unbelievably crowded, that people sleep on the floor and that sometimes you can't even go to the bathroom because there are people there too. A girl who comes from that part of China tried to push me to take a plane instead, even though it would have cost ten times more (my train ticket only cost about 100 yuan). I was so put off I almost decided not to go, but in the end I thought it might be an interesting experience and I went all the same.

The train ride was indeed quite uncomfortable, although not as bad as some people had predicted. The train left at 10 in the evening and arrived at 5 in the morning two days later, so I effectively had to sleep on the seat for two nights. The train was indeed compeltely packed, with people who just had "standing tickets" sleeping on the floor. Climbing over people to get to the bathroom really was quite an effort. In the morning I had to wait in a queue for a full hour to go the bathroom. However, the train became less packed towards the end. Me and my travel companion brought our own food and drink, just like everyone else, although they did sell food on the train. Washing my hands was also next to impossible, and my legs got quite bad cramps from spending such a long time sitting down. The girl I was travelling with comes from a little village next to Beijing, and so she had never needed to travel by train over this period, and she also found it quite uncomfortable. However, in the end we survived and we reached Chengdu, where we went to our hostel by taxi and collapsed into bed.