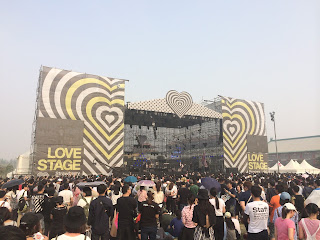 Last weekend I went to the Strawberry Music Festival, China's answer to Woodstock (I make the comparison tongue-in-cheek, but it is a rock festival which lasts three days, and you can camp there). The Beijing edition takes place every year over the three-day holiday for the First of May.

This year's festival actually didn't take place in Beijing itself, but rather in Lanfang, a county of neighbouring Hebei province, which is however relatively close to the city (in the sense that it only takes an hour to drive there from the Eastern edge of Beijing). Last year's festival was abruptly cancelled by the Beijing police alongside all of the other music festivals planned over the holiday, for reasons unknown. That may be why this year the organisers decided to move out to Hebei, in search of friendlier police bureaus.

I went to the festival on the first of May, the day when Prodigy were slated to appear. The festival was held inside a golf course surrounded by a huge replica of Beijing's old city walls, the ones that were regrettably knocked down in the fifties. The air pollution was unfortunately really bad when we first arrived, prompting us to wear masks (luckily it got better later in the day). Hebei is after all China's most polluted province. 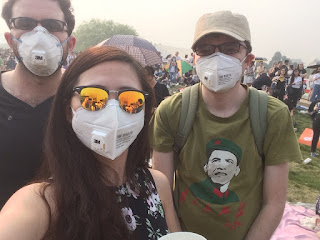 The tickets were expensive, costing 240 yuan for a single day (and 600 for the whole three days). The festival grounds were huge, with about seven different stages with different bands performing simultaneously. Most of the bands were Chinese, but there were a few foreign guests. Some people had brought tents and were camping there for the whole three days. There was a section with lots of stands selling food and drink, all reasonably priced. Fortunately alcohol was on sale, although there was only a meagre selection of beers at a couple of stands. This was still an improvement over a few years ago, when no alcohol was sold anywhere on the premises. All the same, you could see none of the heavy drinking you would find in a rock music festival in most countries. Obviously in China heavy drinking is the preserve of government officials and old men, not cool young rock fans.

The crowd was mostly composed of young Chinese, with quite a few Westerners thrown in. I seem to remember there being more foreign faces the last time I went. Perhaps the drop in the number of foreigners in China is beginning to show? Or perhaps the festival being so far out of the city put off a lot of people from going? Still it was nice to see a diverse crowd hanging out together listening to rock music.

One of the coolest acts I saw was the Taiwanese reggae group Matzka. The singer is a Taiwanese aboriginee from the Paiwan tribe who sports dreadlocks and completely gets the whole reggae attitude and look. Prodigy, the festival's biggest draw, performed last. They were good fun for a while, although I am really not a big fan of electronic music. 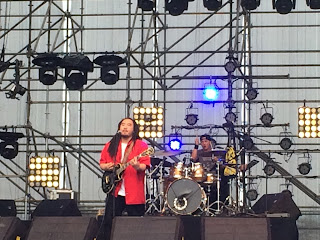 All in all, it was quite an enjoyable experience. The festival was large and well organised, with none of the outrageous rip offs I experienced at other such events. The acts were mostly good quality, although the state of Chinese rock music continues to be dire. The heyday of Mainland Chinese rock remains the late eighties/early nineties, when Chinese youth was in a rebellious mood, and their music reflected this. Nothing produces good rock music like dissatisfaction. 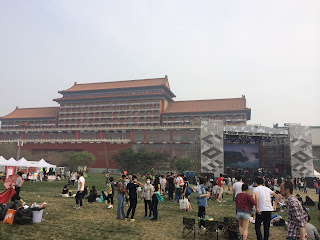