A week in the Yellow Loess Plateau 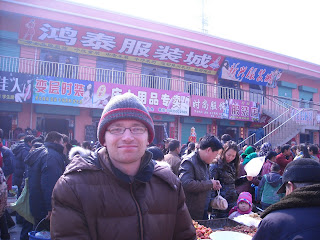 I have just got back from my Spring Festival travels. As you can see I managed to make my way out of Beijing in the end, although I had to take a plane to do so, since buying a train ticket turned out to be simply impossible. I initially flew to Xi'an and stayed there a couple of nights, taking the chance to see the fabled Terracotta warriors. After that I made my way to the small village of Dong Hou, in Shanxi (山西） province. A Chinese friend of mine comes from there, and she invited me to spend a few days at her family's home.

The village is located in the depths of the Yellow Loess Plateau, the plateau that straddles the Yellow River and covers 640.000 square kilometers of Central-Northern China. To get to the village I first took a train to the town of Sanmenxia, where I was met by my friend and we travelled by bus to her home. As the bus crossed the Yellow river and made its way through the countryside along dusty roads, houses and cars started to get scarcer and scarcer and I realized with pleasure that I was headed for somewhere quite remote. The village in question turned out to be the last stop on the bus line. It must have consisted of a few hundred houses.

Although I have been to the countryside in China on other occasions, before this experience I had only ever been to rural areas in Southern China, where the villages and the landscape look remarkably different. In the North, houses tend to contain their own private courtyards, as my friend's house did. As I expected from my previous experiences in rural areas, the living conditions turned out to be quite rough. There was no heating, no possibility to shower and no running water. There was a tap in the courtyard, but it was frozen, so we had to rely on containers of hot water. The bathroom was the usual hole in the ground behind the pig sty. What I found hardest to stand was the constant cold. Since this was Northern China the temperatures were often bitterly cold, only slightly better than Beijing. Although in Shanxi central heating does exist in the cities, it still hasn't reached such small villages. I spent every waking hour with a heavy coat on. At night I was so cold that I slept with my hat on, as well as three thick blankets over me. Towards the end of my stay I got a cold myself. The food I was given was good, although it was pretty much the same for every meal. Rice is not usually eaten in rural areas of Northern China, and I never eat it once while I was there. Instead, the staple food which is eaten with every meal is Mian Bao (a kind of bread bun). Another interesting fact is that the family I stayed with only eat two meals a day (one around 10 AM and one around 4PM). I was told that in the summer they eat three times a day, but in the winter only twice because they days are shorter.

My friend's father works as a labourer in cities during the year and only returnes to the village during holidays, while her mother lives there permanently. As a result the father could speak relatively good Putonghua (Standard Chinese), while the mother only spoke in pure local dialect, which I could hardly understand at all.Of course, on the first evening of my stay they displayed much curiosity towards me and asked me many questions, including "what special food do people eat in your country for the Spring Festival?". During the following days, relatives of the family would pay visits to the home for the Festival, and I would also be taken to the homes of other relatives. I found that most people could speak to me in Putonghua, except for the elderly. Among the many questions I got from people, there were certain recurring ones: "is it true that England is very developed/more developed than China", "is it true that in your country you don't have the Spring Festival, but only Shendangjie (Christmas), "Can you get used to our food" etc... One rather unusual question which I was aked by various different people was if it is true that in the West when a person turns 18, their parents will stop looking after them. Although nobody has asked me this anywhere else in China, it seems to be common knowledge throughout the village that Westerners turn indipendent at age 18. Perhaps they had just had a program on a local television channel which implied this. Various people also asked me if I thought their village was "luohou" (backward), to which I was forced to reply that yes, the economy is not very advanced there. (In the photo, some rather dramatic scenery next to the village where I stayed) 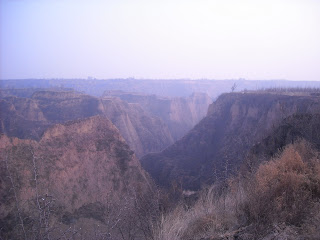 What really struck me was the apparent level of adherence to traditional folk religion and customs. The house where I stayed and many others displayed a shrine for the local gods in the living room, and a little shrine to the "earth god" near the entrance. My friend's mother is apparently a strong believer in these gods, while she herself said that she "would like to believe in them", which I take as an indication that she doesn't. There is a little temple to the gods located on the edge of the village. The road going towards the temple from the south was blocked for the following reason: more people than usual have died in the village over the last two years, and a Feng Shui expert suggested that blocking the road might lead to better luck. Feng Shui is clearly still followed and taken seriously by everyone.

My friend's family belongs to a clan which was begun by a man who arrived in the village 200 years ago. On the first day of the new year, all the members of the clan gathered together, and the men conducted a religious ceremony to commemorate the clan's ancestors. The ceremony is forbidden for women, and I was given the chance to observe it. I followed all the clan's men to the courtyard of a house where the ritual would take place. Sitting among the others was a man who I immediately supposed must be a religious figure of some kind. He had long hair gathered in a pony tail, a long beard and big round glasses, all of which made him very conspicuos in the context of a Chinese village. Indeed, he turned out to be a professional Feng Shui expert. On my arrival he looked at me with curiosity and asked me where I was from and if in my country our ceremonies are the same. The ceremony consisted in all the men (about 40 people) bowing down in front of a shrine and praying under the guidance of the guy with the pony tail, while someone lit fire crackers on the side.

All this doesn't really fit in with the commonly held opinion that religious practice is almost absent in China. Even many Chinese will tell you that most Chinese people have no religion, however in rural areas such as the one I visited traditional folk religion is clearly alive and kicking. As well as shrines to the gods, many homes displayed a picture of Chairman Mao. My friend's grandfather had a bust of the chairman in his bedroom. The bed I slept in also had a little medallion with Mao's face danggling over it. Considering that many Chinese gods are actually former generals or other historical figures who were turned into gods after their death, I wonder if Mao might not just become another Chinese folk god in the run. It would be a funny end for a professed Marxist.

I also observed some interesting traditions related to the Spring Festival. Ash was scattered outside the door on the first day of the year, to prevent evil spirits from coming into the house. The usual red strips of paper contain 对联 or Chinese lines wishing luck and prosperity were pasted around the doors of the houses on the last day of the old year, just like everywhere in China. I noticed that one home had white strips and not red strips pasted around the door. When I asked why, I found out that it means that someone has died in the home over the last year.

Talking about death, someone actually died in a home next to the one where I was staying on the first day I arrived. He was only 60, and died of cancer. My friend told me that there has been an increase in cancer deaths in the area over the last years, which she blames on increasing pollution. However, she said that most local people have no awareness that there might be a connection with pollution.

Another interesting feature of the area are the yaodongs, or homes inside caves. Many people used to live in rooms carved out of the rock below ground throughout the area, and a few elderly people still do. I myself visited a home in a cave in which and elderly couple live, in the middle of the village. It was necessary to walk down a flight of stairs to get to the cave's entrance. Seeing how warm the cave was inside, I wished my host family lived in one too. Apparently when my friend was a child, a big proportion of the people still lived in such dwellings, but nowadays most of them lie abandoned.

All in all, the experience was interesting and fun, if a bit trying because of the constant cold and lack of conveniences. Once I got back to Beijing after a 12 hour train ride, I suddenly had a new appreciation of living in a flat with heating, plumbing and a shower. (In the photo below, me with my friend's grandfather, and a little grandchild of his) 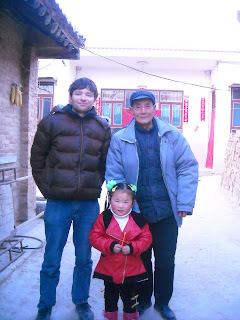 Chanced upon your blog from chinasmack and I found this was a really good post. It's really interesting to read about people practicing religion. Most sources give you the impression that religion doesn't exist anymore in China, which isn't true.
It's also rare to read anything about life in rural Shanxi.